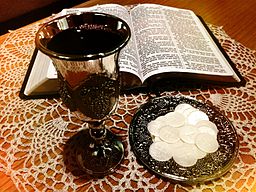 Good Morning! What in the world! Supercali.. what? Yes, that is what faith seems to me like sometimes. Maybe more than sometimes, maybe I get it much less than I wish I would. Why is it that this is so hard for us to have? It is such a hard concept!. Most of us, if we have been paying attention, we have experienced our Lord fulfill what he has promised. We have seen him walk with us. No, no people, not physically but Spiritually!. For He gives many signs that He listens, that He is present, that He cares even for our smallest worries. Wait a minute! what is faith anyway?  The Merriam Webster Dictionary has many descriptions but the main one for the English learners is that Faith is a strong belief on someone or something. Our study today comes from… You guessed it! The book of Luke chapter 8:22-25.

In this passage, The Lord decides to go to the other side of the Lake. I am sure it is to go preach the Gospel but he is tired and decides to go take a nap. while he is napping, a fierce storm attacks them and the apostles start panicking! No doubt they were in danger, no doubt there was a real storm! I would have been panicking too! I like the Ocean but I do not trust it and I have panicked in the ocean before. I know how it feels! It is so dark and scary down those waters!. When they woke Jesus up, He rebuked the storm and everything went back to normal but He said to them, where is your faith?

What did Jesus want them to learn? what does He want us to Learn now? To know that we have power to control the sea and to calm the storm? That would be so cool! In Matthew 17:20 He also said that if we had faith like a mustard seed(tiny little seed) we could say to a mountain move and it would do so. But is it really physically moving the mountain or removing what is blocking our views or trusting in God when under attack or under natural disasters? Knowing that He is in control no matter the outcome!  Matthew 6:27 and Luke 12:25 say: who by worrying, can add a single hour to his life. Job 14:5 also says:A man’s days are numbered. You know the number of his months. He cannot live longer than the time You have set.

By now, Jesus had been with the Disciples for a while, they had been together and Jesus had been busy doing all kinds of good works. Great works! They had never seen anything like it! Sure they had heard about the prophets of old but with all the many gods and myths in the pot, could it be that it was just fairy tale like some of us in our modern times are thinking? surely that was for the simple minded, for the uneducated, for the weak! The era of the prophets such as those that listened closely to God, talked from God, walked with him, cure the sick, and were fed by birds and even brought the dead to life like Elijah and Elisha was long time ago. They were long gone, but now here was this Jesus and He was doing , more than all of them together!

Jesus in my opinion had given them enough reason to trust and have faith! He had been healing the sick, bringing the dead to life, releasing them from evil Spirits etc. You would think that by now, the light bulb would have lit and they would have put the two and two together and said, The stories are true!. God is near! Moses did part the waters and God gave us mana for food! but, Let me go back to me  He has given me enough reason to have faith and I  too, often are unfaithful. Jesus told them they were going to go to the other side of the Lake. He did not say “today we are going to perish” If they had absorbed everything Jesus was doing and saying, they would have trusted. They would have trusted Jesus at His word! They did right in calling him out of his nap (pray), but they did wrong in panicking over it. Where is your faith?

I pray that you and I trust Him at His word!(Did I ever encourage you to read it?)  After all, don’t we have enough prove that He is who He says He is? and if that is so and we do believe so, Doesn’t He say we need to trust him? He said in Luke 21:33 Heaven and Earth will pass away but my words WILL NEVER PASS AWAY! We know the full story! we know how it ends! we know who wins! we know who we are! Let us not fear not matter what storm we are going through but let us put our faith in Him. After all He is the Author and the Creator of it all and he knows your name!